Do you frequently step on LEGO® pieces in your house? Do you watch LEGO® Masters on repeat? Do you or your kids scour eBay for retired LEGO® sets?

If the answer to any of these questions is yes, then you have LEGO® fans in your family.

Your LEGO® enthusiasts and all others in Southwest Michigan will soon be able to buy, sell and trade LEGO® sets at the new Bricks & Minifigs store, opening in Kalamazoo this summer.

This locally owned franchise will be the second in Michigan, and one of nearly 50 in the United States, featuring new, used, retired, and otherwise hard-to-find sets, along with LEGO® Minifigures and accessories.

Local owners Adam and Allison Weiner are excited to bring some LEGO® fun to Kalamazoo.

Inspired by Adam’s renewed interest in LEGO® building during the pandemic, the pair are set to open their own Bricks & Minifigs franchise in Kalamazoo on June 25, 2022.

We stopped by for a sneak peek during their moving day and had the pleasure of meeting the couple and some of their super knowledgeable team.

Whether you are a casual fan or LEGO® expert, Bricks & Minifigs welcomes all with its big, bright space and bricks galore:

Where is Bricks & Minifigs Located?

The Weiners are excited to partner with some of these family-friendly, neighboring shops in the future.

The storefront (previously occupied by Pacific Rim) has been transformed into a bright, creative and inviting space.

How Does Selling or Trading LEGO® Sets Work?

Bricks & Minifigs welcomes guests to trade in their new and used LEGO® sets for either cash or store credit:

How Do you Evaluate the Value of LEGO® Trade-Ins?

Pricing for trades depends upon the completeness of sets, current inventory in stock, and the overall condition of bricks, among other factors.

How Do you Evaluate the Value of Bulk LEGO® Trade-Ins?

Pricing for bulk LEGO® is structured by volume, NOT WEIGHT, and depends upon the overall condition of bricks and the amount of non-LEGO® products mixed in, among other factors.

Which LEGO® Sets Can I Buy Here?

We stopped by during their moving day and were surrounded by LEGO® sets of all shapes and sizes. We found LEGO® bricks in tubs, on shelves, and even on the walls!

Find new and old sets here- including retired ones. We also spotted series fan favorites like Star Wars, Lord of the Rings and Harry Potter on their shelves already.

We snapped a few photos as they unpacked:

You’ll also find a massive selection of LEGO® Minifigures, including the new Muppets characters, which were being unboxed during our stay.

The Bricks and Minifigs Kalamazoo franchise is owned by Adam and Allison Weiner. The couple resides in Portage with their two kiddos Jonah (9) and Margot (7).

While his love of LEGO® bricks dates back to his childhood, Adam’s desire to own a LEGO® store developed during the pandemic. As Executive Director of Farmers Alley Theatre in downtown Kalamazoo, his free time grew significantly when the coronavirus shuttered their doors.

As he spent more time building with LEGO® sets during the lockdown, he discovered a new self-described “obsession” with this creative outlet, spurning his desire to open the Bricks & Minifigs store. Adam left his position at Farmers Alley in April 2022 to launch the new shop.

His wife Allison will focus on outreach and event planning for Bricks & Minifigs and helped design their store.

This LEGO® store will truly be more than just a retail shop- it will be an integral, community partner: the couple is considering potential opportunities with the Air Zoo, KAMSC, Kalamazoo Public Schools, Portage Public Schools, Western Michigan University, and local autism and senior centers.

When is the Grand Opening?

Allison and Adam invite guests for a kickoff party for shopping, giveaways, a plaza-wide sidewalk sale, a raffle, prizes and more! The grand opening runs from 10:00 AM to 7:00 PM.

Here are just some of the activities they have planned:

Brick-Day Parties are not just for birthdays; these celebrations can cover any LEGO®-themed event you could possibly want.

Look for more information on Brick-Day parties to be announced in July 2022.

Are you a LEGO® expert? Here are the answers to some of the most common questions on the popular bricks:

When were LEGO® bricks invented?

LEGO® bricks started with Danish carpenter Ole Kirk Kristiansen, who began making wooden toys in 1932. The first plastic brick was made in 1949; those bricks still fit with LEGO® bricks made today!

What is LEGO® short for?

What is the plural of LEGO®?

In a tweet responding to this very question in 2017, the LEGO® Group explained the proper use of their famous brand name:

When did LEGO® toys arrive in the United States?

The LEGO® Group licensed an American luggage company, Shwayder, to produce and its products in the United States and Canada in 1961. Under the agreement, the LEGO® Group supplied machinery, molds and other equipment, while Shwayder handled production and sales.

In 1965, Shwayder changed its name to Samsonite.

How many LEGO® bricks are made per year?

36 billion, which averages to 125 million pieces per day.

Whether you are an avid LEGO® fan, casual collector or just love supporting local businesses, Bricks & Minifigs Kalamazoo invites you to stop by soon! They will be open seven days per week, starting June 25, 2022. Liz is native to the Mitten, having grown up in Metro Detroit. As a Kalamazoo transplant, this mom of two is passionate about connecting parents to find their villages. She enjoys working outside, using nerdy technology, and consuming more Twizzlers than necessary. 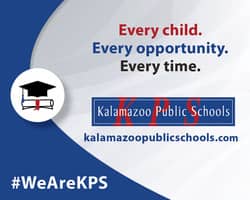